Mittens and the President spent debates one and two trying to out chest thump each other about China.  There’s more to come in the final debate, where fifteen minutes have been set aside for “the rise of China and tomorrow’s world.” On one level, the men are debating economic policy. On another level, they’re positing China as a threat, to show they are the one better able to protect the country from the new yellow peril.

With so much airtime given over to China – Evan Osnos at the New Yorker called it “the strangely starring role that China has come to play in this campaign” – Time Magazine decided it was a good week to put China on its cover. The focus of Hannah Beech’s cover story is the Community Party’s leadership transition rather than the economic policies that have incited so much finger pointing and whining from Mitt and the President. Still, Time manages to ride the China-as-threat leitmotif with an all red cover headlined, “The New Leader of the Unfree World.”

The article itself is titled Big Brotherhood, with a long sidebar on “An Orwellian State.”  The lead paragraph describes a recent official celebration that took place in a Tiananmen Square that “bristled with the paraphernalia of a paranoid security state.” Rather than political reform, Breech writes, the Communist Party has been building a “massive internal-security apparatus” that has made China “the biggest security state in the world.”

Being critical of an enemy wins votes and sells magazines. But it can also, sometimes, lead to an uncomfortable self-awareness.  This was the case after World War II, when Americans were confronted with the hypocrisy of Black soldiers who had fought for freedom and democracy in Europe returning home to Jim Crow. END_OF_DOCUMENT_TOKEN_TO_BE_REPLACED

The Color of Data

No time for a proper post this week, but wanted to share a few thoughts about race and technology.  This question, especially: what is the color of data?

In one sense, data has no color. Or maybe it’s the luminescent green of binary code 1’s and 0’s.

In another sense, data is white. As in the white folks who are working the jobs in data, big or otherwise.  So maybe Asian too.

What I’m really after, though, is a visual of whose information is being shared in this era of information sharing.  I’m interested in personal data – PII (personally identifiable information) – that, in the maw of the government, has personal consequences: arrest, harassment, deportation. This data, I suspect, is Black and Brown.

We can start with the basics, the decade-long effort to connect up the FBI’s Integrated Automated Fingerprint Identification System (IAFIS) and DHS’s Automated Biometric Identification (IDENT). These two databases contains, from IAFIS, the criminal records of 70 million people + noncriminal info on 34 million people + info on 73,000 known and suspected terrorists, and from IDENT, information on 55 million people.  The racial disparities in the criminal justice system are cumulative, and so are most intense at the  back end of the system (length of prison system).   But even at the front end – where fingerprints are taken – the disparity is intense, particularly when policies like NYPD’s stop &  frisk are in effect.

We can look as well at the information being sucked up and kicked around by HSIN, the Homeland Security Information Network.  In its latest iteration, HSIN 3.0 now contains information about “members of the public who are the subject of documents, reports, or bulletins contained in the HSIN collaboration spaces.”  Those collaboration spaces range far and wide, but the upshot is that these are largely reports on people whose “observed behavior may be indicative of intelligence gathering or pre-operational planning, related to terrorism, criminal, or other illicit intention.”  The “see something say something” campaign has included some desultory efforts to encourage people to not find someone suspicious because of his race, but to report only suspicious behaviors.

There’s no question these data sets are disproportionately African American, Latino, South Asian, and Muslim. But how disproportionate? And why? And is that OK? That’s what I’d like some data on.

On the East Coast, in New York, the NYTimes editorial page editorializes in Stop and Frisk, Part 3 that it’s a good thing Davis vs. City of New York, one of three related stop-and-frisk cases, has been given the green light to move forward in federal court.  The poncey New York Review of Books lays out The Problem of the New York Police.  Eliot Spitzer, former New York Gov makes the case on Slate that All Police Interrogations Should be Tape Recorded

On the West Coast, Los Angeles Police Chief Charlie Beck made a splash last week when he announced a policy for Los Angeles to Cease Transferring Some Immigrants to ICE. Meanwhile, upstate in Sacramento, Governor Jerry Brown vetoed the Trust Act, prompting the LA Times to opine that the Trust Act was Flawed, but so is Secure Communities.  On the same day, In Move That Stunned Advocates, Jerry Brown Vetoes Domestic Workers’ Bill of Rights, while approving Driver’s Licenses for Young Undocumented Immigrants.

In D.C., the U.S. Supreme Court is back in session, with oral arguments for Moncrieffe v. Holder set for this Wednesday. Question before the court: is possession of two joints worth of marijuana an “aggravated felony” that subjects Adrian Moncrieffe – who came to the U.S. legally at the age of three – to mandatory deportation? Best summary of the case by Kevin Johnson at ImmigrationProf Blog.

Laura Poitras, filmmaker and perpetual target of the TSA/CIA, is officially a genius. Glenn Greenwald had a great article in Salon.com on the U.S. Filmmaker Repeatedly Detained at Border for her films critical of American war in Iraq and the War of Terror.

Not yet a genius, but working up to it, filmmaker Eugene Jarecki’s documentary on the war on drugs opens in limited release in New York City. Lovingly and very well produced segment on The House I Live In aired yesterday on NPR’s Bob Edwards show.

END_OF_DOCUMENT_TOKEN_TO_BE_REPLACED

In the criminal justice system, the judge is not the head of the heap. Don’t be fooled by the black robe – the honorable so and so sitting on up high flexing his gavel is not the most powerful person in the system.  The king of the hill is not the police chief or the cop on the beat or anyone in between. It’s not the prison warden. Not the sheriff. The top of the list is not even the legislature, maker of the laws.

The top dog? The prosecutor.

A prosecutor’s everyday decisions – about what to charge and how to prosecute – have a bigger impact than those of any other criminal justice official. Law professor and former public defender Angela J. Davis calls prosecutors “the most powerful officials in the criminal justice system.”

A big chunk of that power comes from keeping their decisions hidden from view.  It’s no wonder prosecutors like to call the shots from behind the bushes, Dick Cheney style: 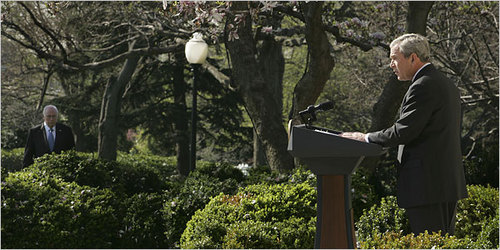 Even when they are doing the right thing, they prefer to do so quietly.  When Bronx District Attorney Robert T. Johnson’s office decided in July to stop prosecuting people wrongfully arrested for trespass in public housing projects, there was no press conference.  After years of prosecuting trespass charges, Johnson’s office realized that the police were stopping and questioning people walking through public housing properties without reasonable suspicion that the person had committed any crime. This is a common enough practice among NYPD officers conditioned by the department’s stop and frisk policies.  It is also a violation of the U.S. Constitution. END_OF_DOCUMENT_TOKEN_TO_BE_REPLACED

With only 36 days until Election Day, we can start with voting. In a good look into the confusion caused by laws banning people with certain criminal convictions from voting, The Nation asks Has Florida Created a Trap at the Polls for Ex-Felons?

Beyond voting restrictions, housing, employment, and so on restrictions imposed on people withe criminal records vary from state to state. The ABA adn NIJ has put together a slickly designed National Inventory of the Collateral Consequences of Conviction. Still a long way from being complete, but looks like it will be thorough when it is.

The Wall Street Journal reports on the New Tracking Frontier: Your License Plates. It’s part of their excellent Economics of Surveillance series, which includes this Can You Track Me Now? interactive graphic.

Danger Room took a look at Center for Civilians in Comabt’s new report on The Civilian Impact of Drones and concluded that Not Even the White House Knows the Drones’ Body Count.